Complete guide to Salinas Pueblo Missions National Monument in New Mexico, including things to do, historic missions, history, hours, directions, and so much more. 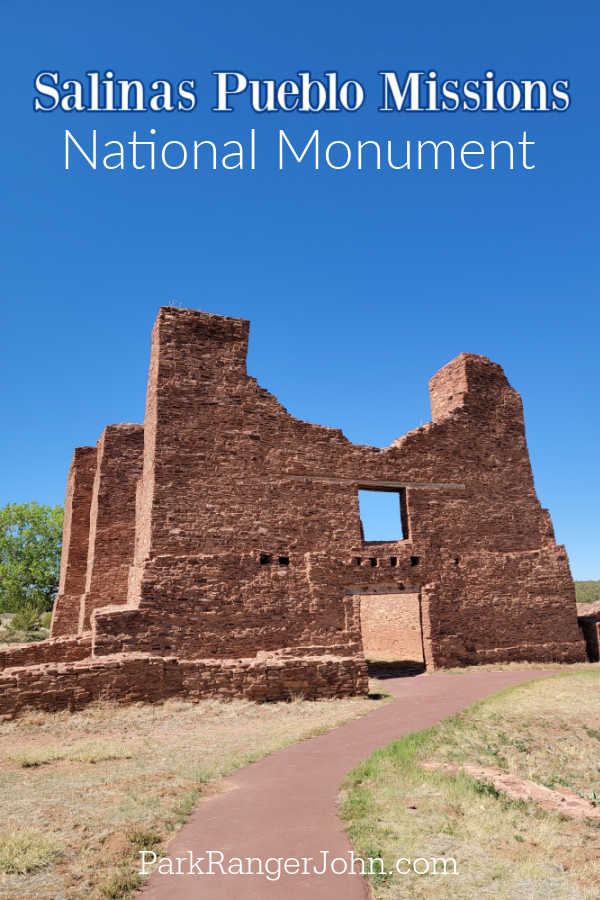 Salinas Pueblo National Monument is a new amalgamation of national and state monuments. The monument preserves and interprets three sites, each of which has more than 1,000 years of history. 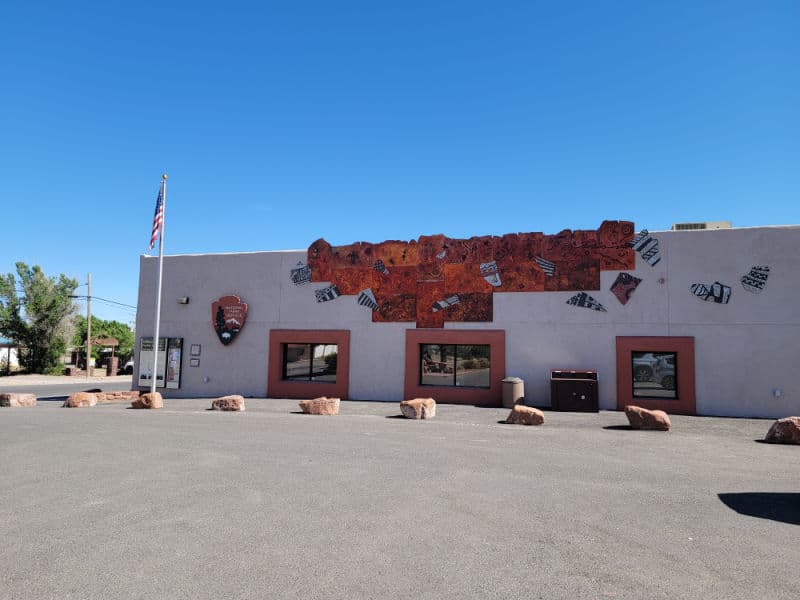 Yes, The park is really interesting and does a great job of telling not only the history of the missions but the surrounding area.

Salinas Pueblo National Monument is located in the center of New Mexico. The monument sits at the foot of the Manzano Mountains.

Like much of the surrounding area, the deep history of central New Mexico stretches back millions of years. An ancient inland sea, the Western Interior Seaway, left behind sandstone bedrock and rich salt deposits across southern and central New Mexico.

The Ancestral Puebloans who lived near the Manzano Mountains when Spanish missionaries arrived in the 17th century were famous for trading salt. Hence, the Spanish dubbed the area Salinas which translates into English as saltworks or salt mines.

During the period from 900-1100, most Ancestral Pueblo groups transitioned from pit houses to pueblo-style domiciles. Many of these multiroom and multistory buildings have been remarkably preserved. Some of the best examples of Ancestral Puebloan architecture are located in Mesa Verde National Park and Chaco Cultural National Historical Park.

The foundations of many pueblos exist within Salinas Pueblo National Monument. However, the more intact remains are of Spanish missions established in the 16th and 17th centuries.

Arrival of the Spanish

The story of Salinas Pueblo National Monument and its structures is a clash of cultures between the Pueblo and Spanish settlers.

Spanish exploration and expansion into the territory of modern New Mexico began with the dramatic journey of the shipwrecked conquistador Cabeza de Vaca. Cabeza de Vaca helped lead a small Spanish fleet with hundreds of conquistadors tasked with exploring the Gulf of Mexico.

After his return, Cabeza de Vaca regaled anyone who would listen about his unbelievable interactions with native groups during his journey. Cabeza de Vaca claimed to have seen the Seven Cities of Cibola where gold abounded.

Coronado and his Conquistadors

Francisco Coronado, hearing de Vaca’s tale, set off with 1,000 conquistadors to find the cities of gold. Traveling far and wide, Coronado ended up empty handed in modern-day Kansas which he called Quivira.

The trail blazed by Coronado was soon traveled by waves of Catholic Franciscan missionaries. In central New Mexico these Franciscan monks worked to convert the Pueblo people and set native groups to work within the encomienda system.

Gran Quivira is home to the largest pueblo within the monument. The massive pueblo is called Mound 7 and had at least 200 rooms.

When Spanish friars arrived, they shared occupancy of the pueblo with natives. Modern excavations revealed an older substructure beneath Mound 7.

Under the massive rectangular pueblo was an older circular pueblo. Within two hundred years of Spanish arrival Mound 7 was unoccupied due to disease, warfare, and drought.

Working from Mound 7, Spanish missionaries oversaw the construction of two separate churches: the smaller San Isidro and the unfinished but enormous San Buenaventura. Ruins of both churches can be toured. 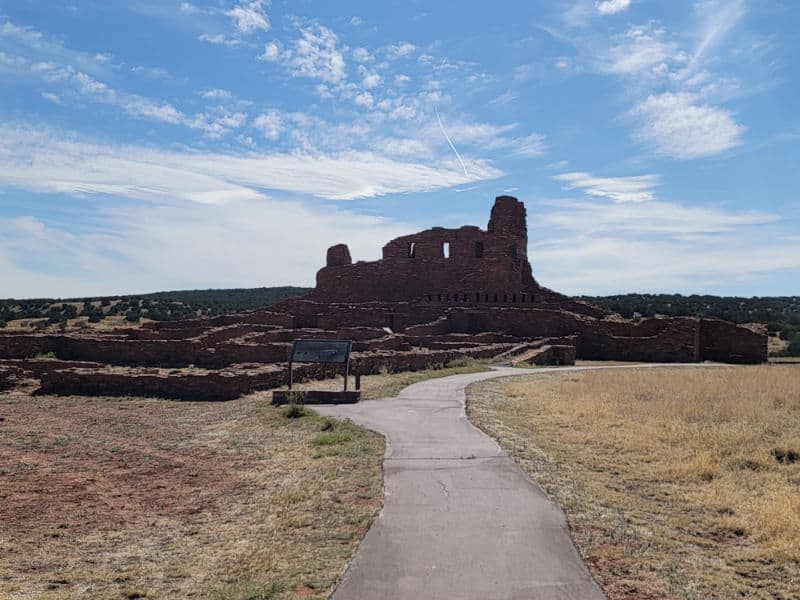 The Abó site contains a pueblo and the foundations of a small church and convento. Construction began on these in 1623. Fascinatingly, the convento contains a small kiva. Kivas were dugout, circular, religious structures used by many Native American cultures across the U.S. Southwest.

It seems as though the kiva was intentionally included in the design of the convento to bridge Catholic and Pueblo religious spaces.

By the 1640s, the kiva had been filled in with refuse, perhaps hinting at less accommodating conversion strategies.

Similar to Gran Quivira, drought, disease, and Apache raids on Abó led to its desertion by 1673. 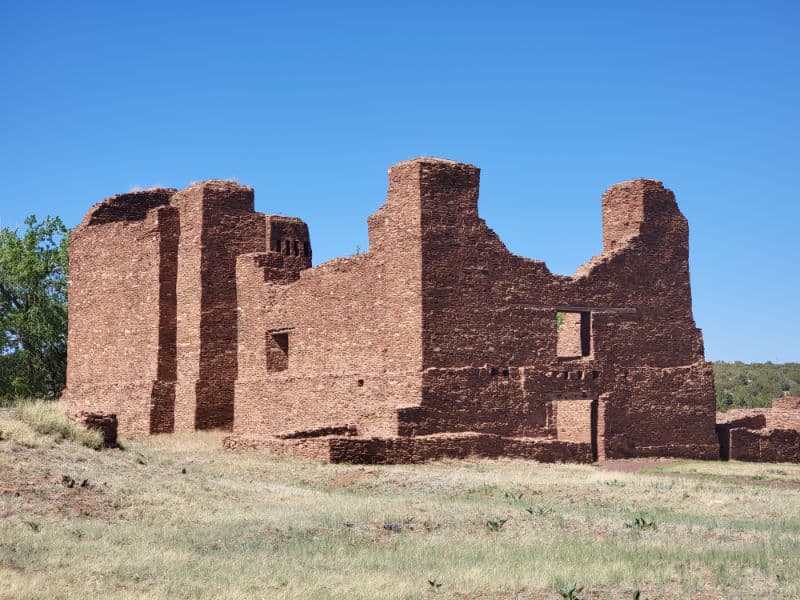 Similar to Abó, Quarai has another church and convento which seems to have been constructed with a kiva at its center.

However, this kiva is uniquely square! Like Abó, the kiva was filled in within two decades and the site was emptied of inhabitants by 1678.

Spanish settlers repopulated the area in the early 1800s despite the threat of attack by Apache warriors. These settlers contributed their own unique structures, plazuelas, to the already-existing complex mosaic of Ancestral Puebloan buildings and Spanish Catholic hybrid religious structures.

Plazuelas are fortified ranches. Some plazuelas had their own defense towers.

Creation and Unification of Salinas Pueblo

Salinas Pueblo National Monument is both old and new. The park initially consisted of a single site, Gran Quivira, which was designated as a monument in 1909.

However, the State of New Mexico gave over control of two additional sites, Abó and Quarai, to the federal government in 1988.

The multicultural history of the United States is on full display. Beautiful desert and ancient ruins await the adventurous a short drive south of Albuquerque. 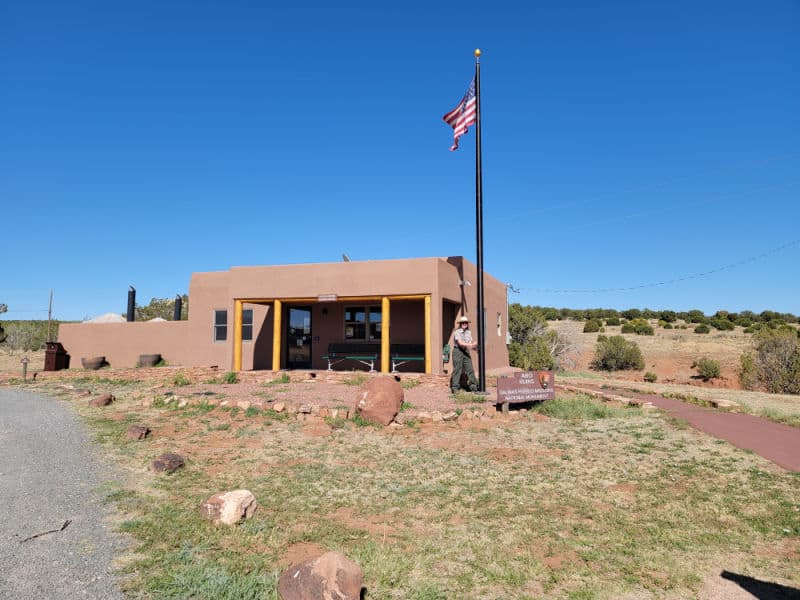 Things to know before your visit to  National Park

$0.00 - There is no fee to visit Salinas Pueblo Missions NM

Leashed pets are welcome on the trails and in the picnic areas at Salinas Pueblo Missions. Pets must remain on a leash at all times within the park.

Pets are not allowed inside of the visitor center or museums.

Our cell service was spotty within the park and on the way to the different missions.

Make sure to check park hours for any changes.

There is no wi-fi available within the park.

There is a large parking lot near the visitor center. Each of the missions has its own parking areas.

Abó
There is a turnaround large enough for most RVs and Buses.

Quarai
Located north of the main entrance gate there is an overflow parking lot which will accommodate most RVs and Buses.

There is no electric vehicle (EV) charging station within the park 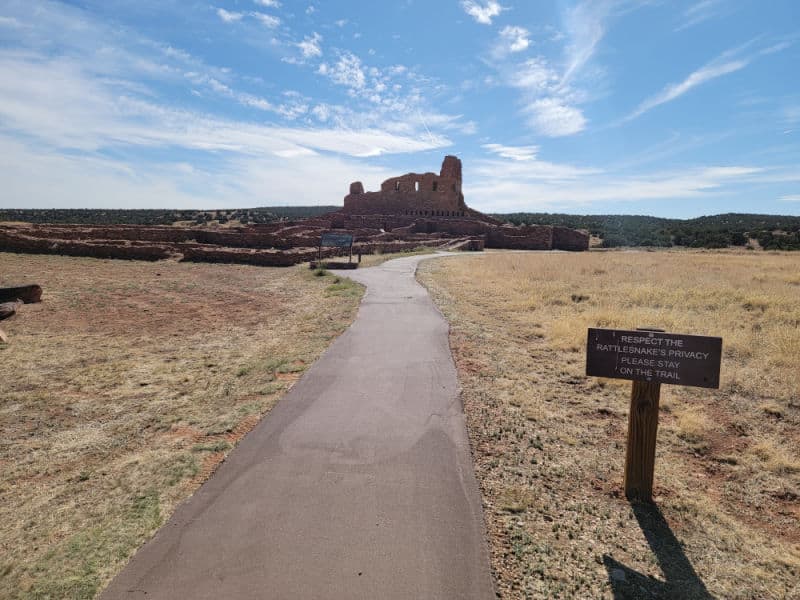 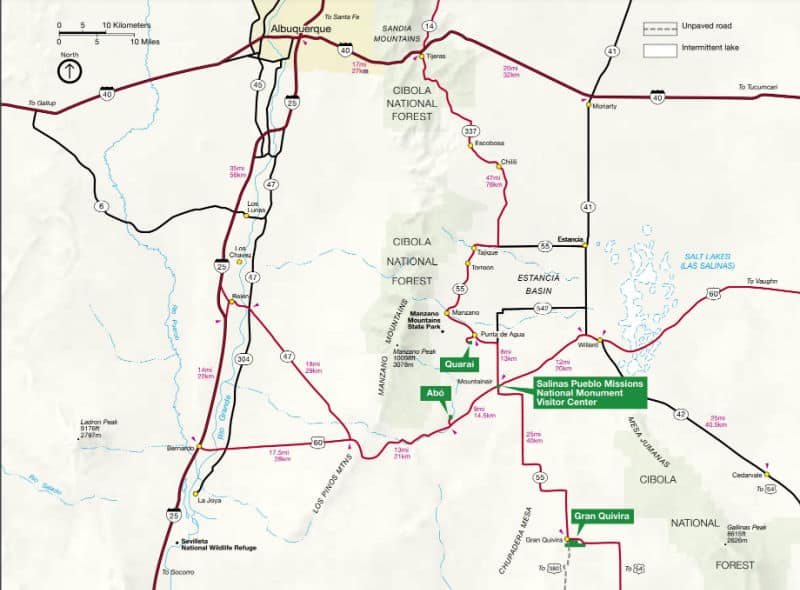 Where is Salinas Pueblo Missions?

Salinas Pueblo Missions National Monument is located in the U.S. state of New Mexico, near Mountainair southeast of Albuquerque.

The main visitor center is located in Mountainair, New Mexico.

Each of the missions has its own small visitor center. 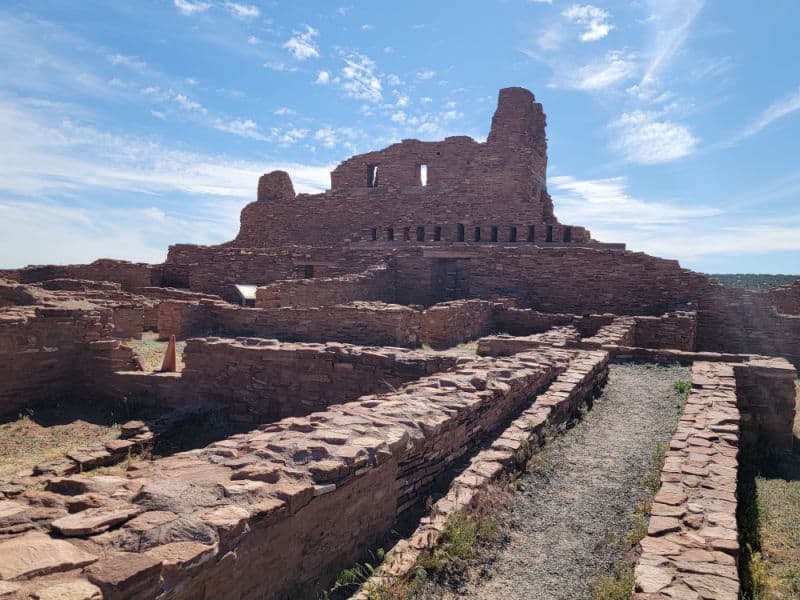 Getting to National Park

When planning your driving route make sure to look at which missions you want to visit and the distance from the visitor center.

The missions are pretty spread out. 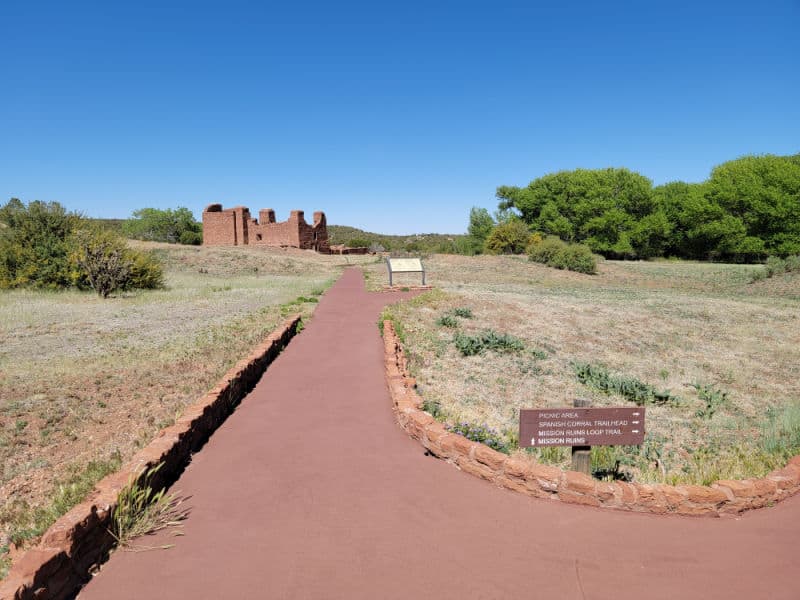 Salinas Pueblo Missions National Monument is a beautiful place to visit at any time of the year. Each season offers its own unique charms and activities to enjoy.

The hot season starts from May 24 to September 14, with an average daily high temperature above 84 degrees.

The cold season starts from November 21 to February 18, with an average daily high temperature below 56 degrees.

The coldest month is in December, with an average low of 29 degrees and a high of 49 degrees. 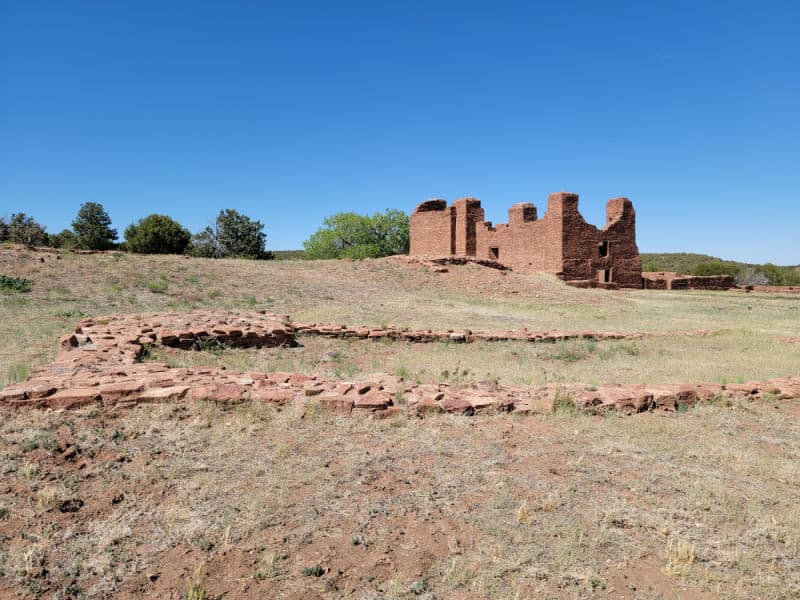 Best Things to do in Salinas Pueblo Missions

We suggest planning a full day to visit all three mission ruins within the park. It is a fairly long drive between each mission site and you will want to plan time to explore each ruin.

There is a main visitor center for the park located in Mountainair, New Mexico. Each of the ruins has its own small visitor center with staff available to answer questions. 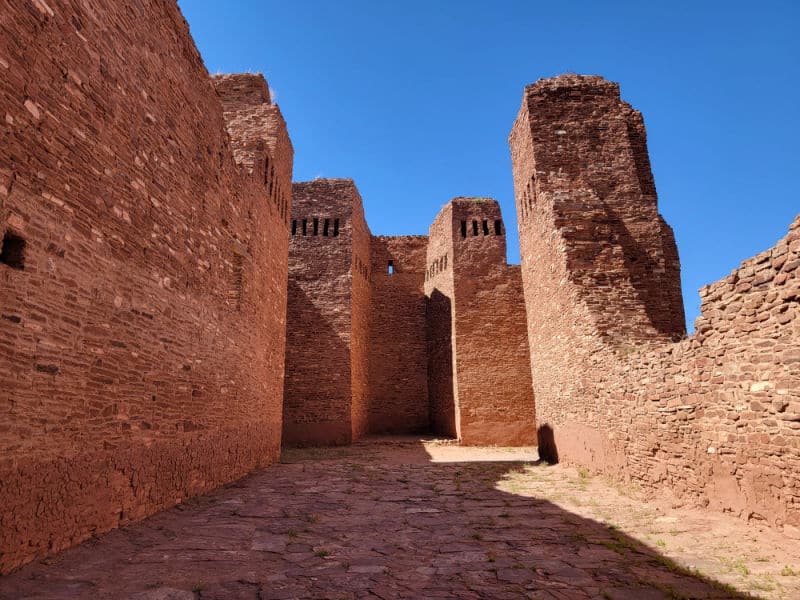 Inside the Quarai Ruins

The three mission sites offer the opportunity to walk around and through the ruins. It is hard to believe how big the missions were and how much is still intact today.

The Junior Ranger program is a great way for visitors of all ages to learn more about the park.

The park also has a Senior Ranger program.

During the year the park offers Astronomy events. 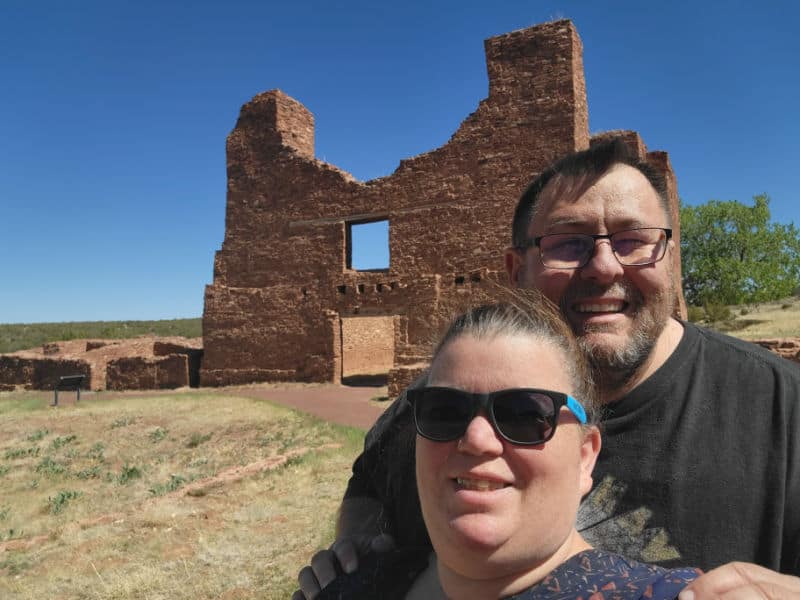 We did not experience any crowds during our visit to the park. We only saw a few other visitors. 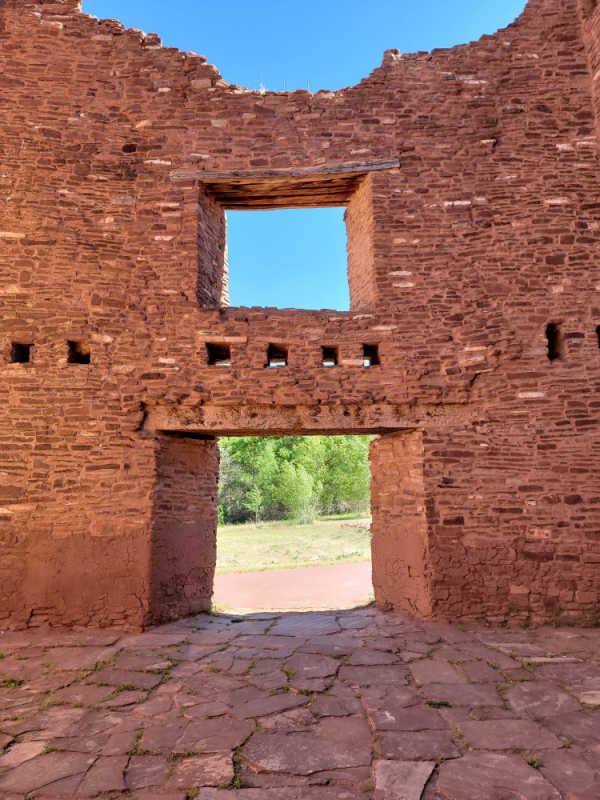 Where to stay when visiting National Park

Click on the map to see additional lodging and vacation rentals near the park.

There are no National Park campground within the park.

Nearby camping can be found in the Cibola National Forest and Manzano Mountains State Park.

Check out all of the National Monuments managed by the NPS